Garrison Theatricals recreate 1842 play ‘The Miller and His Men’

When the British army were stationed in London, Upper Canada in 1837 their presence not only brought security but a new sense of society which benefited both the local upper class and the officers. By 1839 not only were they using their time and talent to create better roads in London, but they were also putting on theatrical performances.

Historian and producer Mark Tovey recently worked with Joe Lella and a their team called Garrison Theatricals to perform ‘The Miller and His Men’, last seen on the stage in London in 1842, put on by a group of British officers.

The highly popular Melo-Drama written by Sir Isaac Pocock was re-enacted on July 12-14 and 19-22, 2011 at Fanshawe Pioneer Village in the authentic Miller Barn. 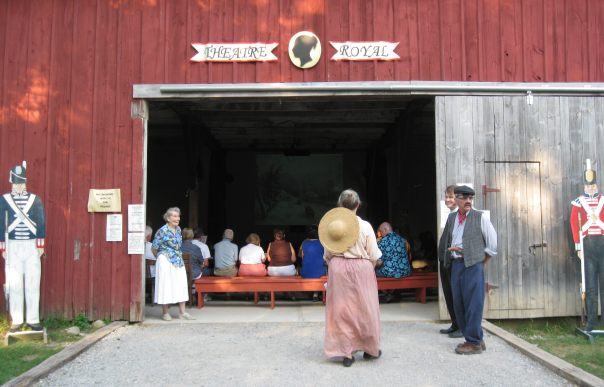 The story focuses around an old miller and his beautiful daughter who is pursued by two suitors: one aging, but rich; another young but poor. To win her hand, the young man makes a secret pledge: to rid the land of the banditti, and restore the fortunes of the old miller.

But much drama unfolds when the wealthy but sketchy miller Grindoff has his own agenda. 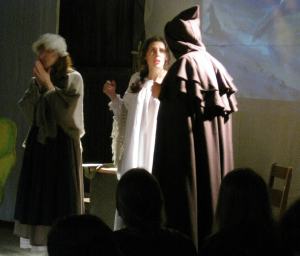 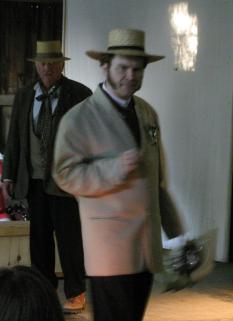 The immediate introduction of a musical number set the pace for a fun-filled and captivating performance. The lyrics were adjusted creatively to fit the play…’Pour Oh Pour the Rebel Lager’ was a favorite rendition sung to the tune of ‘Pour Oh Pour the Pirate Sherry’ by Gilbert & Sullivan.

Traditional Canadian Melodies were also used to add authenticity such as ‘The Maple Leaf Forever’…which I don’t think I’ve ever heard but am glad I did because it was heartwarming. I thought it must have been a contender for the Canadian anthem and it looks like unofficially it was for a while, but was deemed too pro-British to stand the test of time and therefore unknown to newer generations of Canadians. 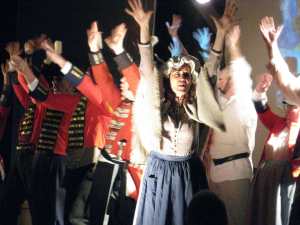 Also lending an authentic tone was the great job done on costumes by Brenda Fieldhouse. From the buttons on the officers uniforms to the bonnets on the ladies heads the actors were decked out in period garb which seems to have made them feel right at home in the Miller Barn.

The actors gave an excellent performance. The company had a good mix of experienced and fresh blood, and I would go back and see this group perform again. 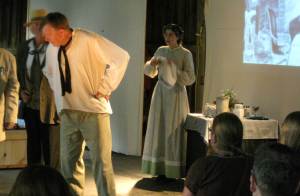 Hannah Drew stood out as the lovely and delicate Claudine, while Andrew House seemed to easily give the miller Grindoff his creepy charm…surprising to find out this was Andrew’s debut! Penny Jones, Mark Tovey and the rest of the cast made so many of the scenes feel real, specifically the tavern and robber’s lair. Benjamin Dyck and Alondra Vega-Zaldivar also stood out in the musical numbers, specifically their solo performances, which gave the characters an added depth.

The audience loved the encouraged involvement to boo the villains and cheer the heroes. We didn’t need the signs telling us to do so, but they added a kitschy feel that made the play feel truly authentic. The location of the barn was a great bonus. Despite the heat of the day, the barn fit the performance well and the stage managers did a great job in setting the scenes effortlessly.

Many thanks to Garrison Theatricals for an unforgettable experience that was entertaining and educational. It was a pleasure to sit in the audience and see this play reenacted by an enthusiastic group who worked hard to deliver such an authentic experience, and who did so with such flair. Job well done!

Videos from the performance

Historian, researcher and writer specializing in historical fiction with a supernatural twist. By day marketing specialist in the insurance industry.
View all posts by Misstoricalfiction »