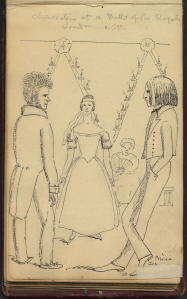 During the 1840s in London, Upper Canada, the 83rd Regiment not only participated in sporting events and socialized with local residents; they also spent time with members of the Freemasons and their families.

On December 28, 1840, the Freemasons held a grand celebration in London which included a dinner and a ball, with officers of the 83rd Regiment and some of their friends.

An article in the London Gazette in 1840 read, “About forty sat down to a sumptuous and elegant Dinner, in the Mansion House, prepared by the worthy host, Mr. Hewitt, whose exertions on this as on former occasions reflected upon him the greatest credit. Dinner being over, the cheerful glass succeeded, and the hilarity of the evening was kept up with many a bumper toast, in which the loyalty, love and good feelings of the company duly participated.”

Once the toasts to the Grand Masters, the Queen, Prince Albert, Col. Dundas and the officers of the 83rd were made, the article states that the ball “was kept up with unabated spirit to an early hour of the following morning. The members of the lodge, decked in their appropriate garb, and their wives and daughters sparkling in the decorations of the toilet, but still more in native loveliness, graced the scene; and the Officers of the Regiment also honored the company with their presence on the occasion.” (London Gazette, January 2, 1841)

British officer Wenman Wynniatt had been stationed in London for at least six months by this time. Based on my research it’s likely that he was one of the officers invited to this dinner and ball, along with Col. Dundas and other officers.

If John Harris of Eldon House was a member of the Freemasons’ lodge or was included as a guest (being the founder of the local Mechanics Institute and an influential member of London society), it’s also possible that Sarah Harris may have attended with her father.

Did Wenman and Sarah share their first dance on Dec. 28, 1840? Did candlelight, music, mistletoe and the excitement of the holidays work its magic to bring them together?

Perhaps this party, between Christmas and New Year’s Eve, was the start or even a main event in their budding, young romance.