← Photo submissions – The Great Eldon House Ghost Hunt 2012
Playing the past some more! →

Playing the past with fellow time travellers 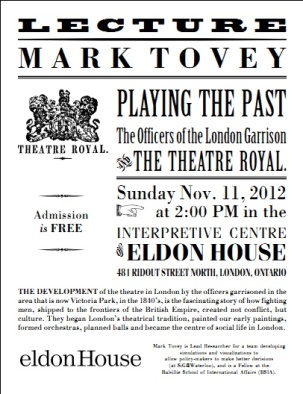 Once I learned that fellow historian Mark Tovey was giving a Remembrance Day talk at Eldon House about London’s Theatre Royal and the officers of the Garrison, I instantly put it on my calendar and told him I wouldn’t miss it for the world.

When Mark called and asked me to read and play the part of a London socialite from the 1840’s I said, “absolutely.”

Also playing the part of several different officers and Londoners of yesteryear was John Biehn who previously acted in the comic role of “Wilbur” in Tovey’s production of The Miller and His Men that ran at Fanshawe Pioneer Village during the summer of 2011. 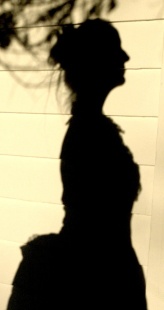 Luckily, the era of London’s military theatre’s hay-day was during the very years of Sarah Harris and Wenman Wynniatt’s romance at Eldon House that I am so enamoured with. Having often “channeled” Sarah by way of assuming her identity for the occasional social event, I adjusted my costume to play London’s Mrs. Ann Porte. Invited to play the part of Mrs. Jane O’Brien was my friend Erin Moxam, a speculative fiction writer. Erin and I had a swimmingly good time assembling our costumes, complete with matching dresses, cameos and period-approximate footwear. I have no idea how many bobby pins it actually took to put up all of our hair. 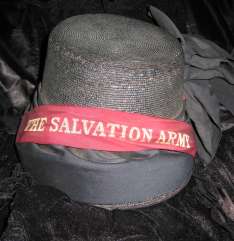 Thanks to Kim at Lovesick, a vintage shop on Richmond Street, I was loaned and entrusted with a beautiful bonnet which complimented my outfit nicely. Mrs. Ann Porte was a respectable married woman after all! While the bonnet is a Salvation Army issue piece, likely from the early 1900s, the classic black bonnet provided the sombre look that I thought Mrs. Porte might have worn. Some of her quotes were memories as well, likely putting their authorship in the latter part of the 1800s.

Mark’s lecture was an entertaining mix of history and drama, bringing characters from London’s past to life through diary readings, letters, and newspaper reviews. London’s military garrison was extremely important: they protected Londoners from rebellion skirmishes, created infrastructure helping to create some of London’s main roads, and they also left an incredible legacy of culture. For, at this time, Britain seemed to rule the world and were marking their territory everywhere they went.

We have British officers to thank for painting the first images of London, they organized balls and steeplechases, and they also built London’s first theatre, the Theatre Royal, located at the site of today’s One London Place. Using some of the officers early illustrations of London, the lecture also provided a behind-the-scenes peek in re-enacting productions from the past. It was also fascinating to hear how Londoners took over the theatre after the regiments left London to return to England, kick-starting our community’s foray into organized plays and artistic productions.

With the theme of playing the past in mind, Mark, Erin and I were inspired to stay at Eldon House afterwards and tour the house and grounds in our costumes. There’s something quite surreal about being in a historic location in period costume.

Forget about the world outside, and we could easily have been back in 1841. As we stood in the library I felt sure I had been transported to a time that would have Amelia or John Harris come through the doorway at any minute, as diligent hosts, to offer us refreshments. 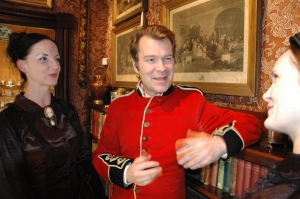 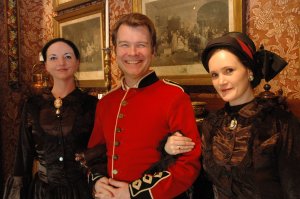 In the dining room, we mingled under the chandelier and I considered how Wenman Wynniatt’s apparition was seen by Sarah Harris disappearing into that very room. Does his energy still linger? Does Sarah’s?

Out onto the grounds we ventured, walking the porch that circumscribes the house where family members of several generations have paced or relaxed with friends. 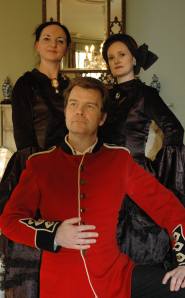 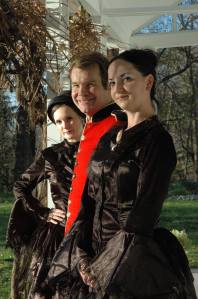 We strolled across the lawn and looked down the hill overlooking Harris Park, which in previous years held a series of landscaped terraces with steps leading down to the flats along the Thames River. 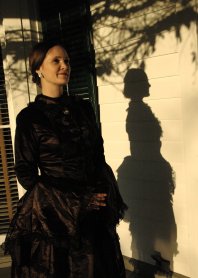 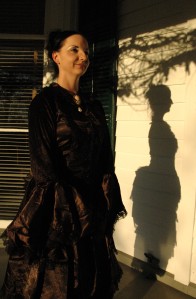 All in all, it was the perfect way to spend a Sunday and, more importantly, remember that in addition to the many veterans who served our country during the past century, there are also many other generations of veterans who were responsible for protecting and fighting for London’s founding families and for the city that we live in today.

Historian, researcher and writer specializing in historical fiction with a supernatural twist. By day marketing specialist in the insurance industry.
View all posts by Misstoricalfiction »

Posted on November 17, 2012, in Uncategorized. Bookmark the permalink. 4 Comments.

← Photo submissions – The Great Eldon House Ghost Hunt 2012
Playing the past some more! →